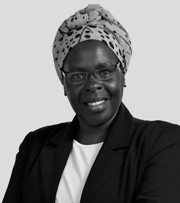 Tecla Namachanja Wanjala combines years of academic and practitioner work in the field of peacebuilding and conflict resolution. She recently worked for Pact International as the Chief of Party for the Peace in East and Central Africa (PEACE III) Program from 2014 to 2015 aimed at enhancing African leadership in the management of conflict within the Horn of Africa by improving the ability of communities and peace committees to respond to cross-border conflict. From 2010-2012 she served as Commissioner and Vice-Chair of the Truth Justice and Reconciliation Commission in Kenya which was established in the wake of the tragic events of the 2007/2008 Post-Election Violence. In 2005-2008 she worked for Japan International Cooperation Agency (JICA) as a consultant on peacebuilding and post-conflict reconstruction for Eastern and Southern Africa. Prior to this she helped establish and develop the after Coordinator for Peace and Development Network (PEACENET) gathering non-governmental groups working on conflict-transformation in Kenya. Before that, she worked with victims of ethnic clashes, Internally Displaced People and refugees. In her native Kenya, Tecla is one of the three women recognized as having been Pillars of Peace intervening in Kenya’s1991-92 and 1997 Ethnic Clashes. She was also one of the nominees for the 2005 1000 Women for the Nobel Peace Prize initiative. Namachanja is a holder of a PhD in Peace and Conflict Studies from Masinde Muliro University of Science and Technology and an MA in Conflict Transformation from Eastern Mennonite University (EMU) in Harrisonburg Virginia, USA.